a is for apple - a Preschool Lesson Plan

We are starting our more "formal" home preschool this week.
Most of what little children learn is learned as you go about the day,
teaching things in an organic manner.
Our more structured learning is to focus on
early reading & writing skills,
listening quietly to a teacher while sitting still,
& craft time. 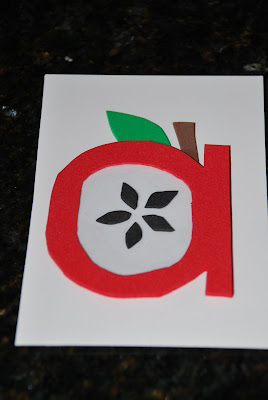 This week we begin with A is for Apple.


When I cut out the craft foam
for the abc craft card,
(found here at Totally Tots)
I used a template for myself,
roughly following a printed letter "a"
in Century Gothic font,
at text size 350.
I am not very good at free-handing
with the scissors in craft foam!
I realized as I was cutting,
that this is not a preschool craft.
I was going to have
them glue the pieces.
But, decided to do it myself
& just give the flashcard to the kids.


Phonic Sounds & Writing
Most of the lesson I will focus on the short sound for the letter "a".
We will also focus on the lower case.
We will do a brief introduction of capital "A".
And, talk briefly about the long sound for "a" (as in acorn).


You can find letter tracing worksheets to practice penmanship at this link.


I wrote words up on the board that contained the letter "a".
The kids learned recognition of the letter in the context of various words.
Here's a few.


The kids looked for the hidden letter "a" on this picture I drew. 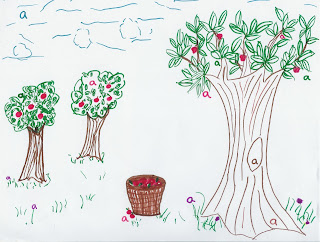 I am not very good at drawing.
But, you have my permission to use the picture for your own kids, if you want!

Kitchen
We made the Apple Shake Ups from this lesson plan.
We learned about apple varieties & did a sampling. 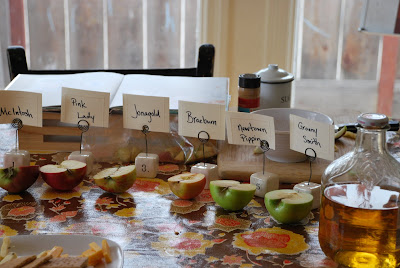 We drank Apple Cider & snacked on paired some
cheeses & oatmeal cookies with our apple shakeups.


History
Johnny Appleseed's (John Chapman) birthday is coming up this week - Sept. 26th.
For a little history lesson, we'll read about him.


Art
Our craft was stamping apples to make cool placemats.
Just slice apples in half & dip in paint.
Stamp them onto your construction paper. 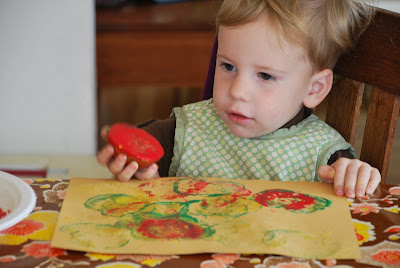 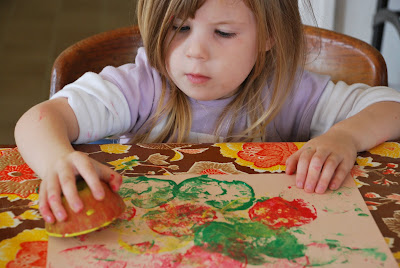 If you want to, you can add stems &
leaves using finger painting or paint brushes.
After they are dry, cover in laminate
so your child can use the placemat.


Bible
We are talking about how
God keeps His children as
the "apple of His eye".
He loves us.
We are his treasure.
We are His delight.
His loving gaze is on us.
He doesn't let us out of His sight.

Deuteronomy 32:10
"He found him in a desert land,
And in the howling waste of a wilderness;
He encircled him,
He cared for him,
He guarded him as
the apple of His eye."

As His children, we are told to keep His Words to us (the Bible)
as the treasure of our heart & the apple of our eye;
the focus of our attention should be on Him & His Word.
We should keep it always before us.

Proverbs 7:2
"Keep my commandments & live,
And my teaching as the apple of your eye."

Geography
Apple trees are native to Southwestern & Central Asia;
The region between the Black & Caspian Seas.
We found it on our map.

We filled a bin with water & apples.  Will the apples float or fall?
They float!  25% of their volume is made up of water.
We bobbed for apples. 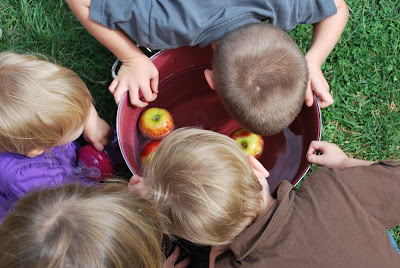 Did you know that as early as 40 A.D., they were bobbing for apples in Great Britain?
The young unmarried girls would play.  They believed that the first girl
to bite an apple & bring it out of the water, would be the first one married that year.

Math
We tried to guess at how many seeds are in an apple.
Then we cut it open & looked at it & gave another estimation.
Then we actually counted to seeds to see how many were really in there.


Science
For a little exploring, we cut open some apple seeds
& examined them under a magnifying glass.


We looked at photos of the different seasons of the apple tree. 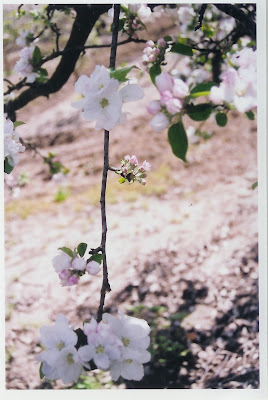 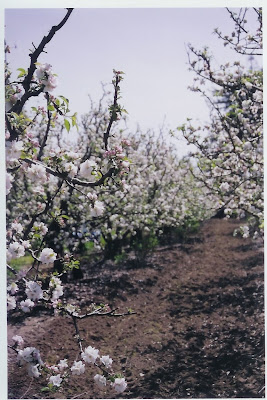 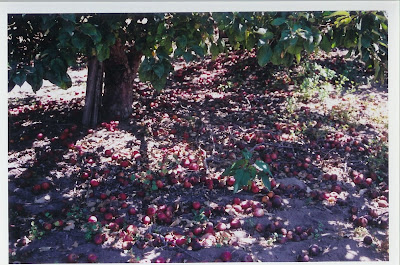 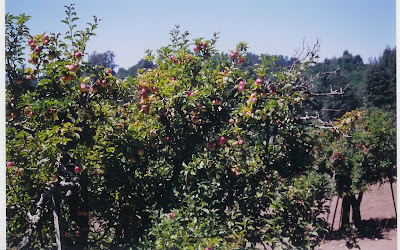 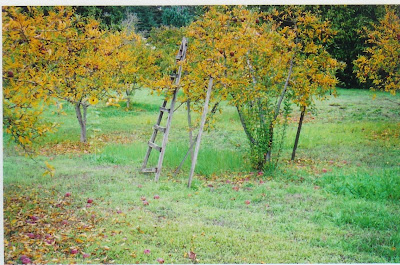 And, we are reading books as shared on my previous post.
Posted by Erin

Email ThisBlogThis!Share to TwitterShare to FacebookShare to Pinterest
Labels: homeschooling

This is SOOOO great Erin! You are doing such a great job!! Your kids are in for a treat with all that you are working on with them!

what great ideas, Erin!! I love this preschool age - everything around us seems to be something we can use to teach them and have fun exploring.
Ethan keeps telling me that learning how to read has opened up "new worlds" to him... I think I remember those feelings :)

I love the craft you chose!

Wow. This is really thorough!! I had no idea you did this much homeschooling with the little ones.

This was so much fun to read! I am excited for next year, when my boy will hopefully be ready for more structured things like this. Thanks for the inspiration! Feel more than free to keep it up. :) Please. ;)

Erin - I am so inspired by you! Did you come up with this entire lesson yourself?

I'm curious. When do you do your lesson-planning? At the beginning of the week? After your kids are in bed?

Stephanie - I am a total newbie! But, I have been working on lesson planning in the evening, trying to do each letter a few weeks prior to the week we will "study" it. That way I have plenty of time to make sure we have all the supplies we need.

Oh, and my lesson plans are heavily reliant on other people's preschool blogs! I am loving the Totally Tots blog. And, the contributors there all have their own blogs with more stuff!

Oh, and my lesson plans are heavily reliant on other people's preschool blogs! I am loving the Totally Tots blog. And, the contributors there all have their own blogs with more stuff!

Stephanie - I am a total newbie! But, I have been working on lesson planning in the evening, trying to do each letter a few weeks prior to the week we will "study" it. That way I have plenty of time to make sure we have all the supplies we need.