This hair has always been a challenge.
Far past babyhood, the cradle cap clung on.
Her straight long hair has always tangled badly.
Detangler never seemed to make much difference.
Brushing was an awful mess.  Painful for both of us.
She never was interested in having her hair cut short.
She wanted to endure & press on.

We learned some things together.
"Grown up" shampoo & conditioner made a world of difference.
This game changing idea didn't come to me until years
of dry, tangled hair had already passed.
*update to add...  Stopping the baby shampoo & moving to grown up stuff
was the only thing that solved the cradle cap, too.
I had been massaging her scalp with this MD Moms stuff,
which is really awesome stuff.  But for babies.
It was really tough once there was so much hair to deal with. 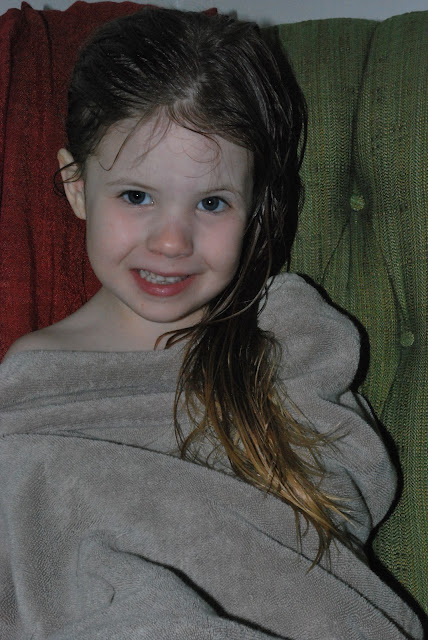 My girl was getting a bit braver in the hair combing.
And I was getting smarter.
Then we made another new discovery.
We started using a brush, instead of the little comb.
Did you even know that there are brushes specifically called
Wet Brush Detangling brushes?
Uh.  Yes.  Apparently they make them.  Hola!

I brush through this head of hair, that goes all the way down her back.
She sits in the tub with conditioner in her wet hair.
She tells me that it doesn't even hurt, when I work out the tangles.
Not a single bit.
I tell her how strong & brave she has grown over the years.
And I think to myself how this is really a lesson for her & for me
for so many things in life.

We have a dream, a goal, something that we are working on,
and along the way things get harder than we thought they would.
We might just choose to bail & get the proverbial hair cut.
Or, we may just take one little step at a time, figuring things out as we go.
We push through some pain and as time goes by, we might just stop & think,
"Wow!  This doesn't hurt like it used to.  I get it now.  I've grown.
And I'm glad to have made it this far."

Email ThisBlogThis!Share to TwitterShare to FacebookShare to Pinterest
Labels: Being the Parent, Gillian, thoughts

Great comparison Erin, so very true! On the matter of tangled hair, when we were kids with very long hair, my dad would spray Showsheen--a horse product--in our hair as a detangler, lol! It did work well, but a little too much made for greasy hair. I learned to brush my hair out before getting it wet, and that made it easy to manage after the wash.

thanks for this tip! we struggle with this SO much. i just ordered one :)

Tangle teaser is the best!

Audrey's the same, she really dislikes having her hair combed out and brushed for the matter. Most of the time I just use my hairbrush and it works better then a comb.

we bought the brush and we love it! I use it too :)