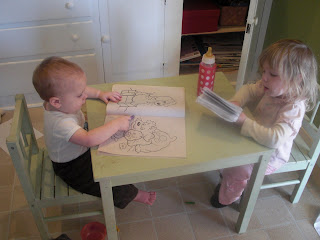 Look how grown up my babies are!! True, Peyton didn't color like this for very long. But, he wanted to sit up at the kid's table so badly. He loves to tag along with Gillian all day long.
He's one! Did I mention that? I don't have any pics to post from his birthday. I lost the memory card from his party. (AH!) I did take pictures of him on his actual birthday. But, they are on my "old-fashioned" camera, and the roll is not finished yet...
Peyton hasn't been brave enough to take steps on his own. He stands by himself easily, without even pulling up on anything, but he doesn't want to take steps. He is a real speed crawler. Maybe walking doesn't seem worth it, just yet. We wonder if maybe not walking is starting to frustrate him, though. I don't know. A lot gets him angry now days. He has been displaying quite a temper. His tantrums can be so dramatic, that it's a little bit funny.
He seems to be trying to talk already. He has some sort of "word" for Dad, Mom & dogs.
He has been slowly getting some teeth over the last few months. He has 4 on the top & 2 on the bottom now. Not all of them are all the way out yet.
He loves to eat. Nearly all the time. He has learned to blow on his food. It is pretty cute. This morning he was even blowing on his frozen peas.
He is very good at playing ball, both catching & throwing. And, he loves playing chase.
Posted by Erin

Good boy. I love kids that love to eat.
Happy Birthday too!! A whole year. It went by fast.
I love the picture of them and yes, they look very grown up in it. Soon, they will BOTH be older siblings. :)

Good boy. I love kids that love to eat.
Happy Birthday too!! A whole year. It went by fast.
I love the picture of them and yes, they look very grown up in it. Soon, they will BOTH be older siblings. :)