We're doing some fingerprint art, inspired by what we've been listening to lately.
I did mine based on the Sunday's sermon about money. 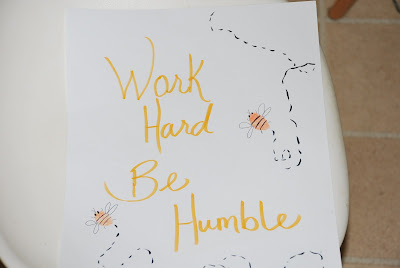 The irony of the art vs. the message is,
I chose bees, because they are pretty simple to make.

Gillian is working on something much more complex.
Her piece is inspired by Wind in the Willows (by Kenneth Graham)

We are listening to an audio version right now,
whenever we spend more than a few minutes in the car.

When I was pregnant with Gillian, near the end, in pre-labor & early labor,
Scott read me the book, Wind in the Willows aloud.
I fell even more, totally in love (with both he & the story).

Now Scott has been reading the story to the kids.
Plus we listen to an english accented guy read it to us
from the CD set we are borrowing from the library.

I asked Gillian which critter she thinks she would be, if she lived in Wind in the Willows.
She figures she would be Mole, because he falls & get scraps & owies a lot.
And so does she.
She figures Peyton would also be Mole, because Peyton is "so sensitive about games",
so says she.
We agree that Moira would be Toad.
I personally identify with Rat.  And I am married to a self-proclaimed Badger.

How about you?
Would you be the wild & impulsive Toad?  The domestic Rat?
The sensitive Mole?  Or the justice-loving Badger?

That is so cute. Love what Gillian said about all the kids. I would put myself as Mole, married to a Badger. Cora would be Toad and Audrey would be Mole. How fun to think about it.

you did a great job on your painting! I'm impressed.
I'm like you - I typically chose the movie over the book. unless its John Grisham or Tom Clancy. Their books fascinate me for some reason.

I think at times I can be each character you pointed out. I'm not sure I'm ever always just one.

Love it, Nicola! Okay, Stef - if you won't play the game of choosing a critter, that is your prerogative. ;) I am still not sure what critter to give Kendall...