Maybe this will bore you.  But, for the month of March, I'm gonna flashback to our Irish honeymoon every week. 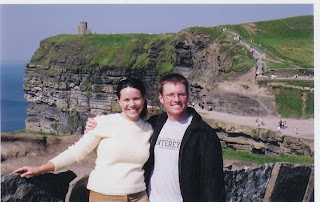 Scott & I stayed in a little town called Doolin for 1 night.  I don't know why I chose that town.  The inn was more like a Motel 6.  And, there was nothing going on in the town.  Nothing.  There was pretty much nothing there.  The tavern that we ate at happened to be our favorite meal from the trip, though.
It was near to the Cliff of Moher.  We had wanted to go there.  That was our planned day trip.  I asked the inn keeper if there was a taxi service we could call, to take us to the cliffs.  He gave me a map & said it was a brief walk.  No need to drive.
I headed out in flip flops.  It was a 2 hour walk there.  One way.  Up hill.  The whole way.  Tour bus, after tour bus passed us by.  One eventually stopped.  As we walked near, the driver opened the door & called out to us.  He offered us a ride.  As we boarded, he told us that he had already been down with one group & had seen us walking.  Now he was coming up with a new load of people.  And, we were still walking.  He laughed at us crazy honeymooning Americans.  He said we could ride back down with him for free if we came back to the bus before their departure.  We took him up on the offer.
Oh. The cliffs were spectacular, by the way. At one point, we went to join a bunch of people who were laying on the ground, right at the edge, heads hanging off to look straight down. We laid there for a minute or less. Then we looked at each other. Why join in on such idiotic behavior? One gust of wind and we're goners. We carefully stood up & went about our visit in a more prudent manner.
Posted by Erin

I personally will love this month of flashbacks because I have never heard these stories before! :) I love them.

What a nice bus driver!