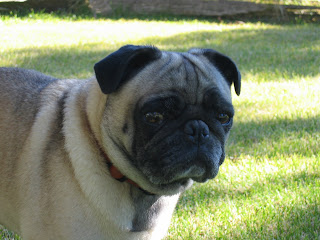 Buzz. Well, I guess his full name is Buzz Saw. I believe my husband choose that name for the lovely snoring sounds that this dog is constantly making. The folks who bred the Pug dog were very twisted, in my opinion. "The short nose is humorous - who cares if the dog can't breath?"


Reasons why I should adore this dog -

Reasons why I just don't - 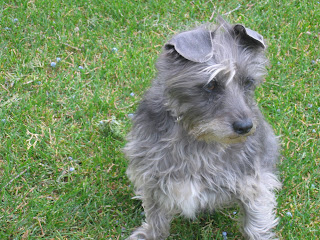 Murphy. He is a terrier of some sort. We thought he was pretty sweet when we first picked him up from the pound....

Reasons I should be really grateful we brought this dog home -

Reasons why I am not -

Email ThisBlogThis!Share to TwitterShare to FacebookShare to Pinterest
Labels: Marriage

Coming from a person that is happy she will never own a house pet... I LOVED this post! You made me laugh so hard.
Thankfully, both Jason and I do not want house pets, so I'm safe. ;-)
Aside from just not wanting the extra stress and expense, we're both badly allergic.

It was good of you to think of all the reasons you're thankful for them. Good attitude!
So funny...

This is funny Erin. Good post. I have been thinking recently about getting a dog, since Elijah is now fascinated with animals. This post does make me think though. I think we have similar likes and dislikes with this. Maybe pets aren't for me...

But! Krista! Even if pets aren't for you - maybe they are for your children...

Krista, don't do it!! You'll regret it! If your kids want to see animals, take them to the zoo more often, or, over to someone else's house who has pets. ;-)

I met someone the other day that said she wasn't having anymore kids, because between her 3 boys and 2 dogs, she's swamped. I thought that was so sad.
So whatever you do, don't let them take over your life. :)

The woman who can't handle more kids, because of her dogs, is a sad commentary, indeed. But, Stef, don't put Krista in the same boat. She is strong enough.
You ladies really need to read my husband's upcoming book, on why every Christian child should be raised with pets. He intends to begin writing anyday. Probably tonight, in fact. Especially since we see the need is so great.

Ug. I actually think the way people over do their pets (and I don't mean you guys) is unbiblical. Too many people put them in place of their kids and are acting like God puts an importance on the house pets, when he doesn't.

Personally, I think there are plenty of ways to teach kids responsibility without pets. For us it would just be unwise due to the expense, our allergies and needing to find care for the thing every time we went away for a day or more.

but I will read Scott's book when he finishes it. :)