December is nearly over.
We have done very little to put order to our post Christmas house.
tomorrow we head over to our last Christmas celebration/family get together.


We did not really accomplish our goal of giving to someone outside of our house
most every day leading up to Christmas.

But, the times we did, we had a lot of fun surprising people.
Sometimes we were called elves.
Hm.  Not what we were going for.
Speaking of such, I so do not get the Santa thing.
I think whoever made up all that stuff really was trying to steal Christmas from Jesus.


Neither were we completely successful with having an advent reading every night.
We gave it our best shot, though.
the kids would daily clamor, "who gets to open the advent drawer?!!"
It is amazing what a simple thing, like unrolling a piece of paper, can be to the littles.
Peyton is still asking about the advent drawer.
I guess he didn't quite get the idea of advent being the looking forward to Jesus' coming
(in this case, Christmas).
But, I know the kids learned one thing through our advent learning.
they know what Emmanuel means.  that makes me glad. 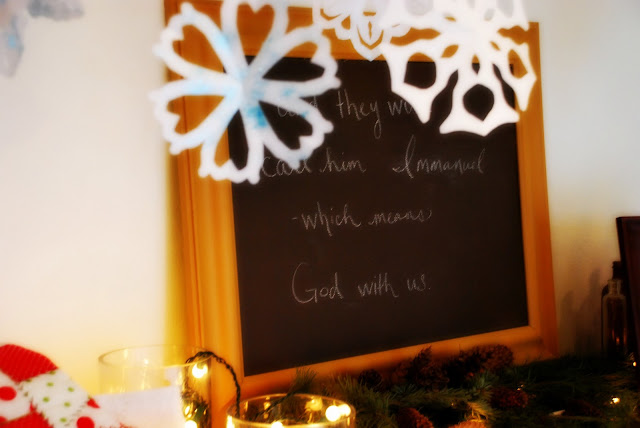 I was working on sewing a Christmas skirt.
I started it right after thanksgiving & nearly finished it that week.
On my birthday, Moira gave me the gift of slicing through the skirt in four places.
I will not pretend that I didn't cry a baby bit.


I continued to work on it through the month & never got it done in time.
It turned out dressier than I had expected.
Even if I had completed it in time, I would have been all dressed up with no where to go.
Maybe I'll finish it while riding in the car on Friday.  I have only hand sewing left.
If I do, I show ya'll what it looks like.


the kids sang in front of church for a Christmas program & they were so cute.
they knew the words & motions!

Scott & I got our annual Christmas shopping date.
the 3 big kids had a sleepover with Grandma & Grandpa.
Scott got home from work early.
I was all ready to head out for fun.
I threw everything in the car, except for the baby (thankfully)
& proceeded to lock the keys in the car.
I was so mad at myself.
I called the lock shop down the street.
"Can you help me?"
NO.
I started panicking even more.
Called AAA.  She said they would have someone there within 45 minutes.  Hooray!!!
they totally saved the day.  He was here & had the car open in 30 minutes.
People, do not neglect your AAA membership.


We drove to one of the stores on our list, 45 minutes away, to find that they were closed.
Another fail by me.


I just went back out there the next morning prior to picking up the rest of my kiddos.
Instead of sewing.
Kendall didn't get that stocking yet this year.
thankfully, she was very forgiving on the matter.


Speaking of Kendall, she is almost 1 year old!  1 month shy of.
WOWzers.
And, she wears this Dr. Seuss-ish dress.

Like Cindy Lou Who.
It is so cute, but not as cute as she, you see.
Kendall LuLu. 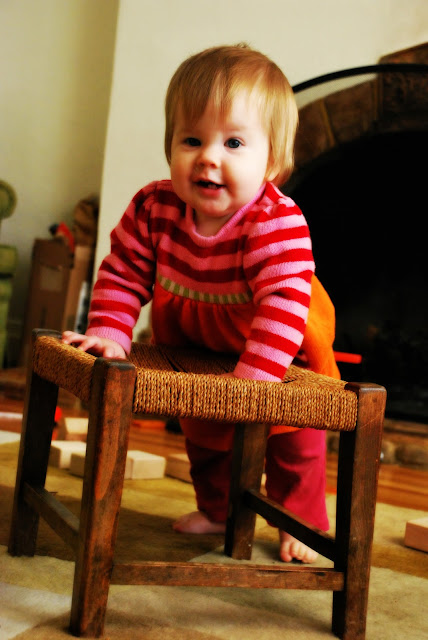 I made her the easiest sock animal on the planet.
I spotted the idea on Pinterest, of course.

speaking is making gifts, Gillian was very into gift creating this year.
She made a rake for her dad, upon noticing that his old rake had a broken tooth.
After we opened all the presents Christmas morning,
we had to stop her as she tried to demonstrate the sturdiness of the tool.
She grabbed the rake & offered  to rake up all the toy on the rug.
I believe she will be a bit disappointed to discover that the rake is mainly artistic,
& not so practical. 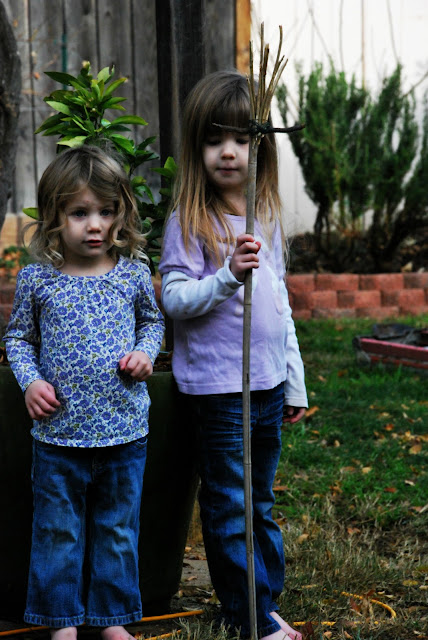 Scott tracked down the block set that he used to play with as a kid
& bought some for our kids for Christmas.
He built a castle for them to wake up to Christmas morning.
We told the kids they needed to come to our room when they woke up on Christmas.
We wanted to see them when they walked into the living room.
We woke with Kendall & were in our room when we heard them sneak into the living room.
We ran out in time to hear them gasping, "Beautiful!" 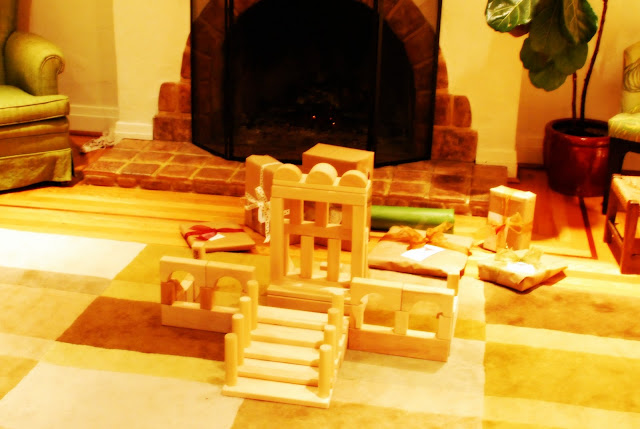 Scott & I were gifted the perfect blanket for our bed
& we now sleep warm at night.
And, our new blocks now have a home, in the blanket bag.
Perfect. 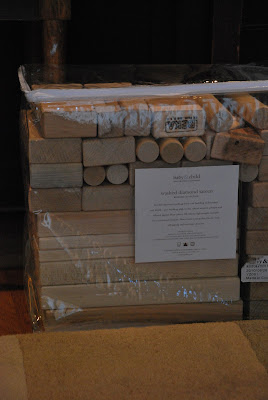 It is nice to be warm, as we have had the common Christmas cold.
Not terrible.  But not pretty either.  Sinus pressure, runny noses, sore throats.

Holiday Hair?  to me that is not doing much to it.  Waste no time.
there are other things to be done.
So, when I needed a bang trim badly, it got delayed until after Christmas.
I was considering growing my bangs out again.
I kinda liked the scarf around the head style. 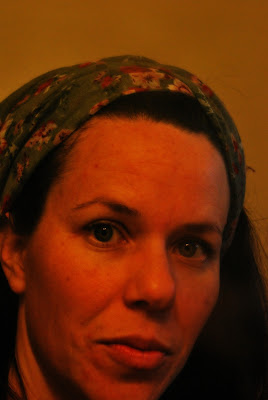 It made me feel constantly industrious.
Always with the need to have my hair out of my face.  You know?
When I went shopping at Staff of Life it was strange
to be treated like a true Santa Cruzian.
Usually I get the vibe at places such as that, that I don't belong.
Scarves don't work for all occasions.  So, I went in after Christmas & got a cut.
She finished my hair with the ends curled (as I never wear it).
Moira asked me why I looked like a toodle (known by most folk as a poodle).

Speaking of style.
I got Scott a fabulous french made sweater with a bit of cashmere in it.
He wore it Christmas dinner & it was so handsome & snugly
(amazing combination).
I promptly washed & dried it & shrunk it, the very next day.
today I am making an attempt to stretch it back to his size.
I am so disappointed.  Please stretch back out, fabulous sweater...

And you all?  Christmas was wonderful.
We had lovely times together & Scott even got some video
of each of the kids singing a Christmas song.
It was awesome!
(But I don't know how to put it on here.)
Posted by Erin

Email ThisBlogThis!Share to TwitterShare to FacebookShare to Pinterest
Labels: celebrations, family, home, Me, My Offspring, projects, The Man

Love the picture of the kids singing! So precious! The scarf looks great! You pulled it nicely!
Sounds like you all had a wonderful advent and Christmas (minus the skirt and shirt)!!
Happy 2012!!